The Wicked + The Divine: The Semiotics Of Snapping

Issue one of Image's The Wicked + The Divine came out three weeks ago now, the latest project by regular collaborators Kieron Gillen and Jamie McKelvie (along with Matt Wilson as colourist and Clayton Cowles as letterer).

The story of 12 gods who incarnate into human bodies every 90 years, inspire absolute devotion and fear in equal measure and die within 2 years, it has, as with most Gillen/McKelvie projects, firmly taken root in my subconscious. It's a fantastic "why didn't I think of that" concept, positioning the gods as rock stars who encourage fanatical adoration. It taps into concepts of belief, self-mythologising, fame, art, self-image, the relationship between creators and fans and most importantly, the inevitability of death.

As someone with a lifelong interest in classical mythology and a deep passion for music, it absolutely hits a sweet spot in my mental landscape. Other, smarter people have already examined the issue in a more general sense, but I wanted to really close in on an action that repeats throughout the comic; the snapping of one's fingers.

We see several of the godly characters snapping their fingers in the issue, and it seems to be fundamentally connected to the manifestation of their supernatural powers. What's more, it seems, at least judging by this issue, linked inescapably to death. A short prologue introduces us to the previous generation of godly avatars, who having had their number reduced to four, seemingly elect to end their lives. After a countdown from four (another of the issue's recurring motifs), the quartet snap their fingers in unison, and the large stately home in which they are sitting detonates spectacularly, killing them all (at least, that's how it appears). 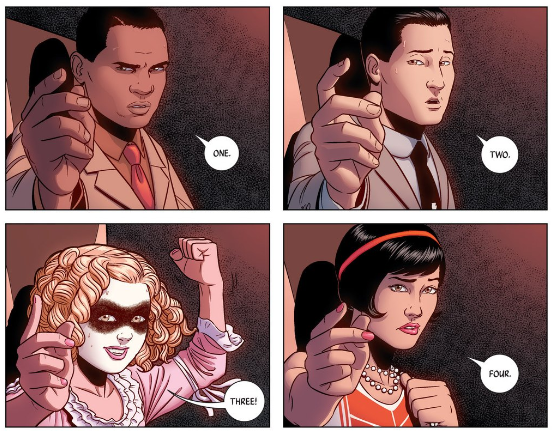 Later, we are introduced to the modern incarnations of some of the gods, namely Amaterasu, Sakhmet and Lucifer (aka Luci). Attacked by snipers hoping to kill her, Luci unleashes her godly powers, exploding the heads of the assailants in an explosion of pop-art gore with nothing more than a snap of her fingers.

And finally, towards the close of the issue, Luci stands in the dock in a courtroom, debating the judge. Are they willing to admit she is a god, and therefore responsible for the men's deaths (and possibly then beyond human judgement), or is she just a delusional human, and therefore the deaths nothing more than macabre coincidence? As the judge threatens to hold her in contempt, Luci replies with her own threat - a hand held aloft, fingers poised to snap. After a moment of tension, she does and once more there is a spectacularly visceral death. Only this time, Luci claims she isn't responsible - someone else did it. 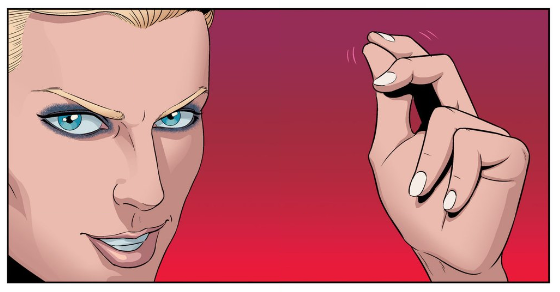 As I rolled the issue around in my head after reading it, tasting the flavours and letting it marinate in my brain juices, one thought began to simmer to the surface - "why snapping?" As a conceit, it felt entirely suited and seemed to gel very well into the books vision of casual, almost nonchalant godhood, but I wanted to unpick it more.

Saying you are able to do something "like clicking my fingers" implies both ease and immediacy. It requires a smallest amount of effort and happens before anyone can react. It's important to note that in the comics, we only ever see the before and the after of the snap - it's an action that's hard to slow down enough to show the exact moment it happens, the hand curled up as the finger and thumb release their tension. By its very nature, the snap is transitory and instantaneous - it is an action defined by where you start and where you finish.

In culture, we tend to find snapping fingers in a few specific situations. Sometime, it is a mark of confidence between two people, like giving someone the 'finger guns' or, more closely, a wink, another act defined by it's immediacy. It's a sign of confidence, perhaps even arrogance, and of a covenant sealed. If you ask me if I'm sure I can take care of something and I simply snap my fingers and point at you, the implication is not only that I can handle the task in question, but that it will be a literal 'snap'. 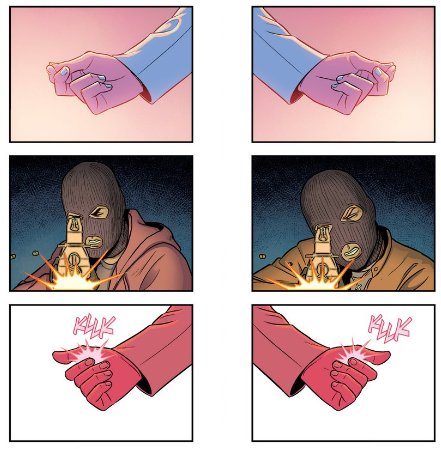 This ease and poise is something the gods in The Wicked + The Divine seem to radiate in large quantities. They are both performers and demagogues, and although their agenda (either as individuals or as an erstwhile pantheon) hasn't really been explored yet, it is clear that connecting with people, with their worshippers and fans, is high on their list. When we examine the gods we have seen so far and the influences we can see in their portrayals, it's clear that Gillen and McKelvie are tapping into the school of performer who have no room for self-doubt in their public image. These are not Conor Oberst-style musicians, heads cowed, mumbling into their microphones. They are Bowie, Florence Welch and Rihanna, anthemic and iconic. These are the kind of characters the finger-snap belongs to.

While we're talking about performance, lets look at another of the finger-snap's natural habitats - music. For as long as there's been music, people have been using claps, snaps and stamps to mark out a beat. As we moved to drums and electronics for our percussion needs, snapping fingers on a track has on the aura of folksiness, simplicity, and perhaps even the dreaded "authenticity". It's what gives Lorde's "Royals" it's stripped-back appeal and Queen and David Bowie's "Under Pressure" it's uniting fuck-yeahedness.

There are certain genres that a more associated with snapping fingers - one can't help but think of the stereotypical jazz club filled with beatniks clicking in appreciation - but really they can find a home anywhere. Their relative quietness compared to guitars, drums et al means that any track using them has to hold back to a certain degree, to create silence that those distinctive snaps can fill. Clicks demand that the music makes room for them. They have power.

Where else do we find snapping fingers? If we're extremely unlucky, they're being waved in our face. Using clicking to get someone's attention is one of those moves that marks someone out as a scummy human being - when I was around 8 I can remember a friend of my granddad's doing it at to a waitress at a restaurant and even at that age, I can remember thinking "That's not how you treat other people". 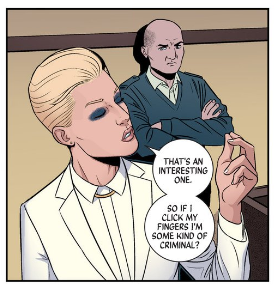 The finger-snap for attention move takes all the confidence and bravado of the act when shared between friends and transmutes it into arrogance and dismissiveness. It's no longer about celebrating people's attention, but demanding it. Not performing when in the spotlight, but rather insisting that it falls upon you. It's an act of control.

So, here we have the primary tool and weapon of our gods, their sceptre and their magic wand (and how appropriate is it that, in a series about the briefness of power, fame and life, it's a transitory action rather than a physical object). It's an action that we can frame in a number of ways, but in the end it occupies all of them at the same time. It's about confidence, creativity and control. It's the wink between friends, the song that you can't help sing along with, and the gesture that tells you "you're not worth my time".

And in that curious alchemy, maybe we find what we're looking for in our pop stars and our gods - something that draws in and pushes back at the same time. Something that promises wonders then asks if we really deserve them. It's the spark of inspiration and the rules we must obey. The promise of glory and the price we must pay. The wicked, and the divine.
Posted by Tim at 23:17

Tim
England, United Kingdom
Powered by tropes, idealism and burritos, I'm a twentysomething muso, cinephile, feminist and nerd. You can also find me at https://twitter.com/trivia_lad